Johnson’s surprise visit included a promise of new military assistance, including 120 armored vehicles and new anti-ship missile systems. It came a day after he promised to send an additional £100m ($189m) worth of high-quality military equipment to Ukraine, saying Britain wanted to help the Ukraine to defend itself against Russian aggression.

“Today I met my friend President @ZelenskyyUa in Kyiv to show our unwavering support for the people of Ukraine,” Johnson said on Twitter. “We are putting in place a new program of financial and military aid that demonstrates our commitment to his country’s fight against Russia’s barbaric campaign.

The head of Ukraine’s presidential office, Andriy Yermak, said “the conversation was rich and constructive”, but gave no details.

An image of the two leaders’ meeting was posted online by the Ukrainian Embassy in London with the caption: “Surprise” and a flashing smiley.

The military aid package announced by Britain on Friday includes more Starstreak anti-aircraft missiles, another 800 anti-tank missiles and precision munitions capable of lingering in the sky until aimed at their target.

“Ukraine defied odds and pushed Russian forces back from the gates of kyiv, achieving the greatest feat of arms of the 21st century,” Johnson said in a statement. “It is thanks to the resolute leadership of President Zelensky and the invincible heroism and courage of the Ukrainian people that Putin’s monstrous aims are thwarted.” 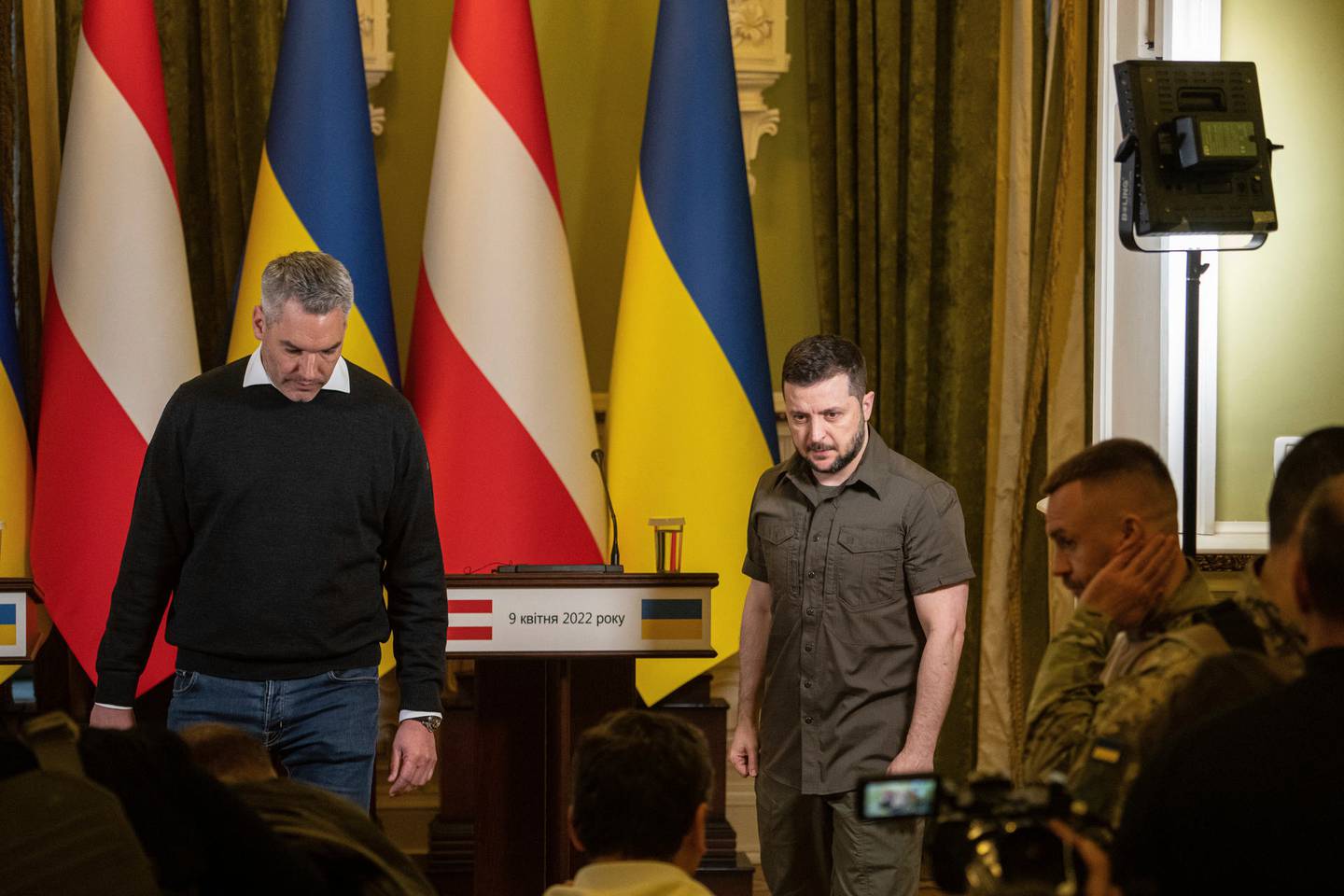 As Zelenskyy makes an ongoing series of virtual appearances to drum up support from lawmakers around the world, a growing number of European leaders have decided now is the right time to travel to Ukraine’s capital, Kyiv, for in-person talks. European Commission President Ursula von der Leyen was in Kyiv on Friday, following previous visits by Czech, Polish and Slovenian prime ministers.

Nehammer met with Zelenskyy earlier on Saturday and promised the EU would continue to tighten sanctions against Russia “until the war stops”.

“As long as people are dying, all sanctions remain insufficient,” he said, adding that Austrian embassy staff would return to Kyiv from western Ukraine.

Von der Leyen, who heads the executive branch of the European Union, traveled to Warsaw on Saturday to lead a fundraising event for Ukraine. She was joined by Polish President Andrzej Duda, with Zelenskyy and Canadian Prime Minister Justin Trudeau appearing via video link.

At the end of the 90-minute meeting, von der Leyen said 10.1 billion euros ($16 billion) had been raised for Ukrainian refugees.

The event took place in Warsaw because more than 2.5 million of the 4.4 million people who have fled Ukraine since the start of the Russian invasion on February 24 have entered Poland. Many stayed, although some moved to other countries.

Co-hosted by von der Leyen and Trudeau, the event aimed to attract pledges from governments, global celebrities and average citizens.

The war against Ukraine is an unimaginable tragedy…

As a human being and as an artist, I felt compelled to respond in the most meaningful way possible. So today, for the very first time, I publicly performed my dad’s song, IMAGINE. pic.twitter.com/Qcggk2XaAx

It ended with Julian Lennon singing his father John Lennon’s peace song Imagine, which he says is the first time he has done so publicly.

Julian Lennon posted on social media that he always said he would only sing the song if it was the “end of the world”. He says it’s the right song to sing now because “the war on Ukraine is an unimaginable tragedy” and he felt compelled to respond in the most meaningful way possible.